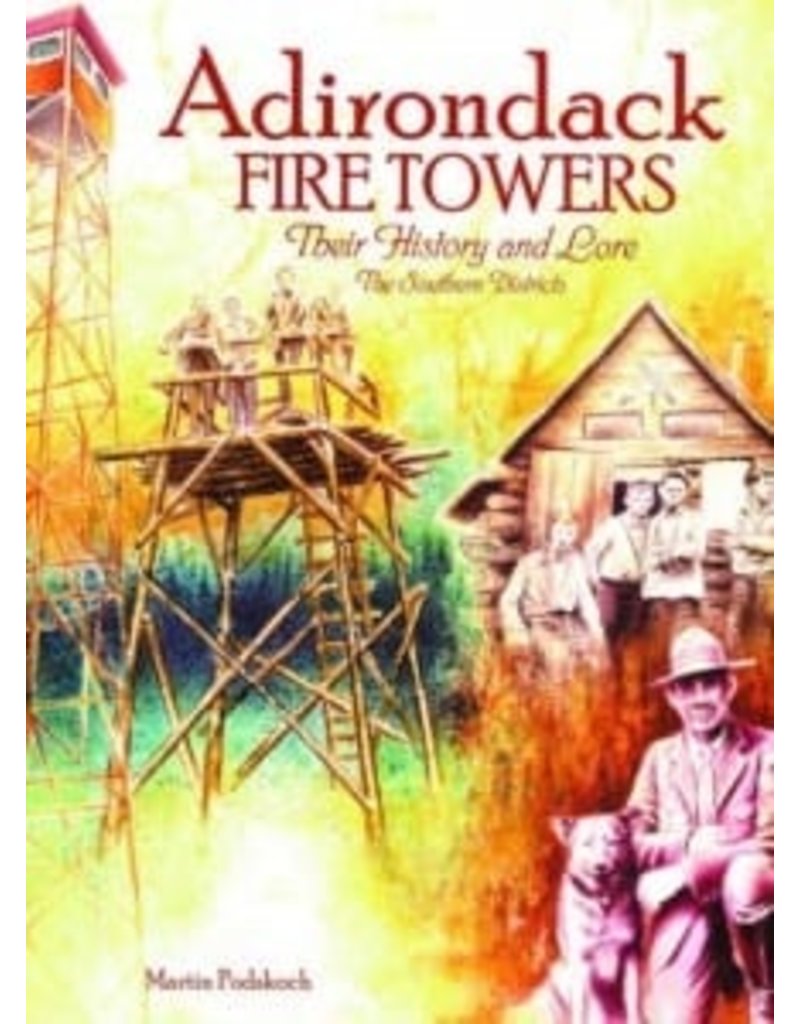 Time was when fire towers punctuated many an Adirondack peak. From these spindly steel skeletons with glassed-in boxes (called “cabs”) on top, observers would spend their summers looking for signs of suspicious wisps of smoke that might balloon into a forest conflagration. They would also welcome hikers, point out the sights and dispense wallet cards as proof the hikers had climbed so-and-so mountain. They and their perches were icons in the Adirondacks for the first three-quarters of the 20th century.

But new technology made the towers obsolete. Aerial surveillance gradually took over the role of the observers in the last part of the century, and many of the towers, after being allowed to rust, deteriorate in the teeth of winter storms and succumb to the predations of vandals, were taken down. A small number are being saved and restored, thanks to the efforts of organizations such as Adirondack Architectural Heritage, the Adirondack Mountain Club and ad hoc citizens committees. They have spawned a new generation of loyal fans.

They have also spawned a succession of books. The latest of these is Adirondack Fire Towers, written by Martin Podskoch and published by Purple Mountain Press. Its subtitle, Their History and Lore: the Southern Districts, suggests not only its thrust and focus but also that another volume is in the offing.

Podskoch, a retired middle-school teacher who lives at the western foot of the Catskills, begins with an overview of the history of fire towers in the Adirondacks. He recounts the devastating fires of 1903 and 1908 and the resulting public demands that something be done. Taking a cue from Maine, New York state set about putting in place a new system of fire prevention and detection. One ingredient was “observation stations,” and within a year of the 1908 catastrophe wooden platforms with primitive telephones had been erected on six Adirondack summits: Gore, Hamilton, Morris, Whiteface, West, and Snowy. The state also created the ranger and observer force (rangers supervised observers) that generated the wealth of lore surrounding the towers.

Hikers on Black Mountain in 1918, when the second tower was erected

By 1916, the state was putting up steel towers, 40 to 70 feet tall with six-by-six cabs housing not only the observer but also his—or very rarely her—circular map secured to a table, an alidade (a swinging metal rod affixed to the center of the map and marked off in miles, allowing the observer to pinpoint the location of a threatening plume of smoke), and the ever-present telephone through which the observer was connected to the outside world by a single galvanized wire that commonly plunged straight down the mountain affixed to tree limbs. Many of these towers survived into the 1980s and 1990s, when, having stood vacant for several years, they were summarily dynamited, chain-sawed or otherwise demolished.

The 50 years from 1920 to 1970 was the heyday of the fire towers. Podskoch explains that fire-fighting equipment and procedures improved, comfortable cabins were built for the observers lower down on the mountains and increasingly sophisticated weather stations helped authorities anticipate fire conditions. The towers became a goal for thousands of hikers, bringing more and more people to the mountaintops. And the observers became effective educators about fire safety and the Adirondacks in general.

But things began to change in the 1970s. Fire-spotting from the air proved more economical, and by the end of the decade 28 towers had been closed, including five of the original six. Despite public protests that were fueled more by nostalgia than necessity, the abandonments continued until, by the end of 1990, there were no staffed towers in the Adirondacks. Those that remained standing were left to the elements for lack of funds to maintain them. A few, beginning with Blue Mountain’s in 1994, have been saved and restored.

Podskoch’s first volume tells the stories of the 28 public and four private towers in the southern Adirondacks. Each tower gets its own chapter, subdivided into History, Lore, Observers, Rangers and, if a trail still makes the tower or its site accessible, Take a Hike. (Podskoch used this formula successfully before, in a book on Catskills fire towers published in 2000.)

What makes this work is that the author tells the story of the towers in the words of the fabled observers, their families and their acquaintances, and in old family photos, whenever he can. To accomplish this he traveled many months and many miles throughout the southern Adirondacks (Buck Mountain, between Long Lake and Tupper Lake, is the northernmost tower featured), tracking down his sources. In the preface he writes, “Many Adirondackers let me camp in their yards or sleep in their homes. Rangers and observers, people who helped protect the Adirondack forest, shared their homes, food and lives with me. I’d visit one home, and the folks I interviewed would call a friend and ask if I could stop by. In five minutes, I was in another home gathering more stories.”

The chapter on the Crane Mountain the structure, which stood from 1911 to 1987 and in 1970 was one of the first to be closed, Podskoch leaps into what he clearly prefers, the personal anecdotes. In their own words they repeat stories their fathers and grandfathers told, of the building of the tower and of the observers who staffed it over the years. The older folks draw upon their own store of memories; they tell us that in the 1930s the district ranger earned less than $100 a month, one observer wore cowboy boots with spurs and packed a .44, and the observer’s cabin was infested with snakes. The photos show the tower standing in lonely majesty on its wild summit, American flag flying; observer William Bills on horseback; observer Will Wood and his extended family enjoying a meal in front of the observer’s cabin; observer Clarence Russell proudly displaying a buck he’d bagged.

Each tower gets this sort of treatment. We learn that for many years the “tower” on Prospect Mountain, at the head of Lake George, was a deck on the roof of the Prospect Mountain House, which, ironically, burned in 1932. We read about the adventures of the few women observers, including Frances Boone Seaman, whose recent memoir of her “Summer of ’42” on Mount Electra in the Webb family’s Nehasane Park was reviewed in these pages in March/April 2003.

Podskoch’s book can be read a tower at a time. Researchers will find the lack of an index frustrating, and purists may grimace at some uneven editing, but casual readers will delight in these glimpses, in words and pictures, of an aspect of Adirondack history that we will see no more.