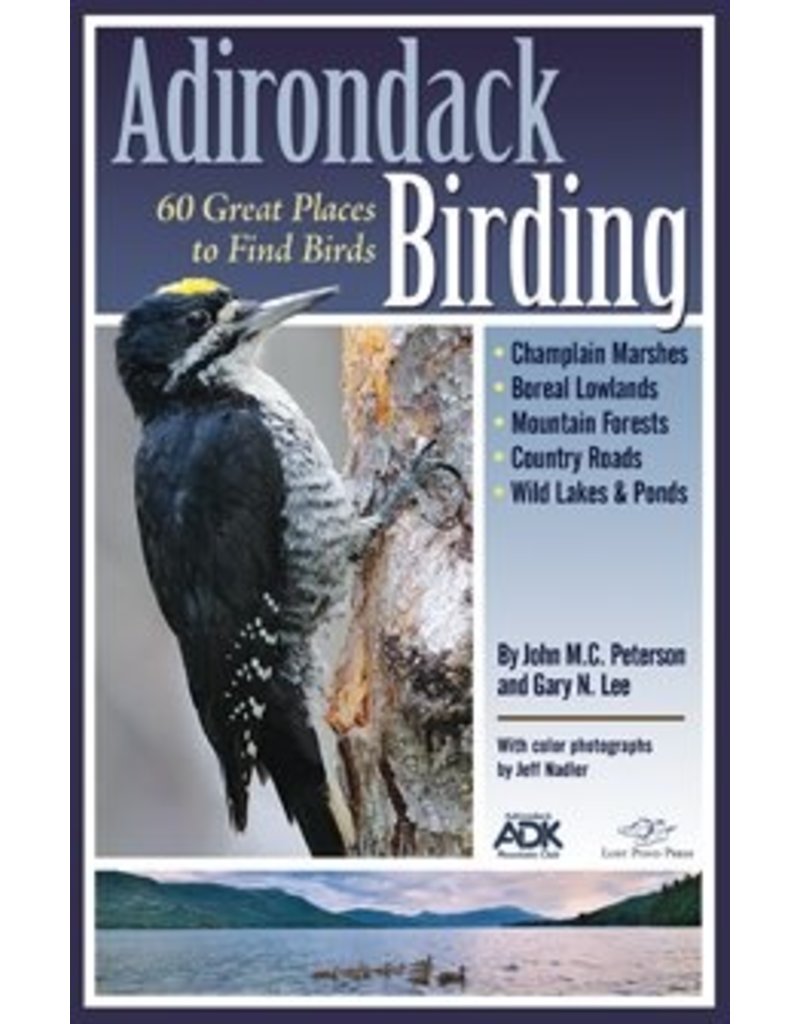 It’s not every day that we get a book here at the Almanack that reaches my list of Adirondack must-haves. John Peterson and Gary Lee’s Adirondack Birding:60 Great Places to Find Birds

(Lost Pond Press, softcover, 240 pages, $20.95) is the kind of book that you will want to have on your shelf – even if you’re not that into birds. Peterson (of Elizabethtown) and Lee (who hails from Inlet), are two of the Adirondack region’s most skilled birders. They drew on decades of experience in selecting the sites for this, the first comprehensive guidebook to birding hot spots in the Adirondacks.

Experienced birders can use the book to search for the Park’s most-coveted species, including boreal birds not found in the state outside the Adirondacks as well as uncommon winter visitors and rare migrants. What I find amazing about this book however, is that it offers the non-birder like me an opportunity to find natural places were I can see a lot of great birds – even if I don’t yet know what they are. If an afternoon exploration to a spot likely to be teeming with birds is what you’re after more than working to complete your birding checklist – this is a great book for you. That’s not to say the experienced birder won’t have something to learn here as well.

Other features of the book include a history of Adirondack birding that stretches into the 1740s, tips on finding boreal birds, an Index of Birds, and hand-drawn maps by Matthew Paul, a Saranac Lake artist. The site chapters not only list resident birds, but they also include records of rare sightings (such as the yellow-nosed albatross that flew over Crown Point in 1994) and unusual facts. I had no idea, for example, that Lows Lake has one of the Adirondack Park’s largest populations of Common Loons.

Adirondack Birding contains 46 color photographs of wild birds taken by Jeff Nadler, one of the region’s premier bird photographers. They include the Park’s boreal species, such as the Bicknell’s thrush, gray jay, rusty blackbird and spruce grouse, and other birds of interest, such as the bald eagle and common loon. The book also has more than 90 black-and-white photos of birds and landscapes. Many of the landscape shots were taken by Carl Heilman II.

Peterson, the longtime regional editor of The Kingbird, an ornithological journal, and Lee, a retired forest ranger, have been birding in the Adirondacks since the 1960s. Both contributed to the Atlas of Breeding Birds in New York State

In 2004, the authors collaborated on Birds of Hamilton County, N.Y., a brochure that lists all the species observed in the county, with dates and locations. Peterson also has authored or edited similar compilations for Franklin and Essex counties. But both saw a need for a guidebook that covered the whole 6-million-acre Adirondack Park and that offered detailed descriptions of sites and their birding potential.

Most of the 60-plus sites described in the book are in the Champlain Valley (such as Crown Point and Noblewood Park), the Tri-Lakes Region (including the High Peaks) or the boreal lowlands in the northwestern Adirondacks (such as Massawepie Mire), since these are the places that attract the species of most interest to birders. However, there are some sites in the southern Adirondacks as well.